calm before the quilt storm

Such a nice weekend here - time to relax and play before the big rush of Easter and Quilt Week.  Weather was a bit on the cool side & breezy, but it helped keep the frantic rush at bay.

Today kicks off Holy Week and it was the first time I've been to a Palm Sunday Mass where the congregation did not participate in the Gospel reading.  Usually, we have several lines to speak, representing the crowd and I felt a bit left out that we weren't involved this year.  They had the rest of the parts covered so it threw me off a bit, and I didn't think it was as powerful to just hear it.  It always seemed so personal to say the words of the Jews willing to crucify Christ.  We had a nice procession into Mass with the palm branches, which was neat, but on the way out, someone took my palm branch!  I snagged another one afterwords, though I didn't have the skill to weave it into a cross.  Growing up J was better at that than me.
I managed to spend some time organizing the sewing room and even got rid of another lingering moving box.  Score!  I finished up the binding on quilt project #1 while watching hockey and got project #2 ready to baste.  It's nice to work at a place with classrooms and large tables so I can bring in my quilts, lay them out & baste 'em where there's plenty of space.

Have I mentioned that it's nice to have cable again?  Especially for it to be just in time to watch the Stanley Cup playoffs.  :D Both the Red Wings & Capitals are in and doing well so far and they games are fun to watch.  The Caps need to avoid the penalty calls though; today's game 3 was full of them.  I also cheer for the Blackhawks (thanks dad) when they aren't playing my other teams, and they could use some help right now.  They've played well, but are down 3-0 to the Canucks (gotta love the name) so it's getting dicey.  It's hard to do anything else when the game is on unless it can be done in view of the tv or during the intermissions - a small price to pay for good hockey!

I've re-hung my hummingbird feeder and have seen 1 zip by so far.  We thwarted the pigeons from nesting on my porch, though they did nest in the downstairs neighbors' porch.  I hope that won't keep the hummers away too much.  Took a walk today and heard a woodpecker, lots of songbirds hidden in the trees, saw the the geese in full force around the pond, startled a bunny and enjoyed the sound of the wind through the trees.  Stepped out briefly after dark and the moon had a smooth orange glow behind a light cloud cover.

I am working my way through my to-see movie list as well with the most recent being Invictus.  Such a good movie!  I like Matt Damon & he did an excellent job in this role. I like how he commits to the story and the character and really gets into it because it shows up on screen and really draws you in.  Seeing the rugby reminded me of summer camp and the international staffers with their rugby Thursdays.  Good times.

A good weekend to recharge and relax before it gets super chaotic as we gear up for Quilt Show at work.  I've helped J rearrange and hang quilts (more like play musical quilts in the gallery) and set-up the School Block Challenge winner display in the lobby.  There's plenty more to handle this week before all the quilters arrive and I look forward to seeing the show in action.

Quilts start popping up everywhere since it's
officially quilt month here in Paducah.  Store fronts, magazines, people talking on the street - you can't escape it.  The library has mini quilts hanging up and they let us fill on of the lobby display cases with 'stuff' from the Museum to help celebrate.


I printed some pictures, an exhibit label, grabbed some fabric - loose, looking like it doesn't care - and borrowed some items from the Junior Quilters to fill the case.

It turned out really well; don't you think?

So I got all excited about my birthday and having M&D come down to party that I didn't even post about it.  Oops.  :o)  We just had so much fun that I didn't think about it until waay later.

I love birthdays and usually spend the preceding weeks in a state on anticipatory excitement.  I was glad to not have to spend this birthday on my own since I am now far, far away from friends.  M&D came down to help party it up in style and we packed a lot into just a few days. 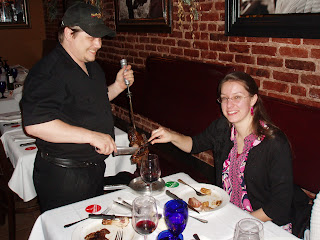 There's an Argentinean restaurant here (who woulda guessed?) and we went to try the rodizio fun.  They had 6 different types of meat that they bring around to your table and you can choose to take it or not.  We tried all types and wowza! they were good.  I can't imagine going to a larger restaurant where they have 10+ types of meat...

We also went to Panera and I got Dad hooked on chocolate pastries....yummm.  I've been rationing out the birthday chocolate pie we had over the last week to extend the chocolatey goodness.

Dad summed it up quite well so here's a brief overview of all the B!day fun:

All in all another wonderful birthday complete with fun adventures, family & friend phone calls and cards and a natural high for several weeks in anticipation.
Here's to the next year - may it be full of adventure and good things!
Posted by bee at 21:24 No comments:


Last weekend I got my cable installed so now I once again have TV channels.  It was kind of strange after the last 6 months to turn the TV on and have actual shows pop-up.  First thing I managed to catch the last half hour or so of the Tour of Flanders, and then spent some time figuring out which channels went with which station.  Sadly, I've discovered that Jeopardy! is on at 4:30 here so I can't watch it- I ask the TV stations, why would you do that?!

Monday, we had some severe wind alerts and then a tornado warning in the morning.  The warning sirens went off and we followed protocol by herding everyone into one of our interior classrooms.  There was a meeting going on so that made it pretty interesting, but the kept going with their agenda and we waited out the sirens.  It sounded like the tornado touched down about 30 miles from us, so we're glad we followed our emergency plans <- it even made it into the newspaper that we did what we were supposed to. Go team. The rest of the week has been very spring-like and has even reached upwards of 85 today, gorgeous.

I spent some time working on one of my 'secret' quilt projects as well and am thrilled about how it's coming along.  I made my first bias binding using several blog instructions to help me figure out how to make it continuous.  It turned out perfectly and from a little over a 1/2 yard of fabric I got 8 yards of binding!  I also picked up some thread so I can continue to work on the next project.

I had Junior Quilters (our young kids (10-17) quilt group) too, which is always fun for a Tuesday afternoon.  There are several different projects going on as some kids are finishing up their quilts from last year, some are finishing up their journal covers & a few have completed their journal covers.  It's hard to keep track of what's going on each month! This month, we put everything else on hold and worked on the Just One Star project from Moda fabrics.

<---I first spotted here it on the blog I follow & was intrigued with what Moda was doing for Quilts of Valor.

I knew I wanted to make a star block to contribute because my grandfather was a Marine and it is a great way to help others. Once I made my block, I hunted up the appropriate colors at work to use with our Junior Quilters and we got another 5-7 stars made.  It was a perfect way to do a small group project that benefits others, gets the kids involved in a larger project and give something back to Moda who sponsors our School Block Challenge each year. A win-win!  If you're looking for a quick sewing project in the next couple of weeks - this is it!  Head over to Moda's blog & get stitching on Just One Star!