Today was a little Spring teaser here in KY ~ temperatures in the 50s, sunshine everywhere, noisy birds chirping away & the sounds of water (melting snow) running in the gutters.  Color me happy!  All this nice Spring-like feeling even got me outside for a short run. 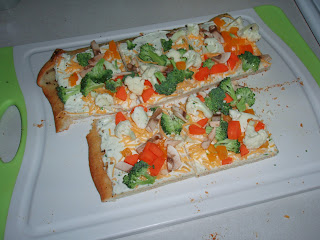 Then it was on to the yum factor of the day: Veggie Pizza & Red Velvet Cupcakes!

Pizza courtesy the amazing SM and cupcakes via Food Network's own Paula Deen.  Some of the cupcakes will go with me to work tomorrow to share around since I can't possibly eat them all.  The pizza, however; will not be shared because it's just too yummy!  :o) 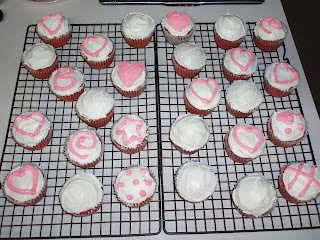 View from the Front 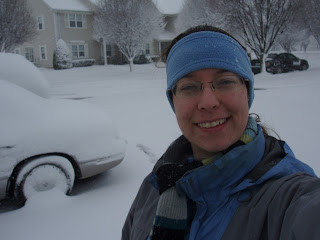 More snow!  It's exciting to get actual snow and not just flurries this time around.  Some people have asked about the weather here and were surprised to learn it gets cold here too - today was a high around 15 degrees.  Monday morning I woke up to about 4" on the ground (and roads and car) and it continued to snow all day ending up with around 5-6".  That took the area by surprise as the roads weren't treated at all so it was a bit tricky getting in to work.  I also helped shovel the walkway so our visitors could get from their cars to the front doors without trudging through the snow.
This morning, the snow was expected and it was nice to wake up and watch it snow all day long. It was more of a fine, powdery snow but still snowball-packable.  Roads weren't too bad this morning, but coming home they were still sloppy and the roads in my neighborhood weren't treated at all.  They were all snowy and I'm sure will be more icy/crunchy tomorrow as a result.

Several co-workers didn't make it in as they had longer drives/hazardous roads and then a couple more left early for the same reasons.  This meant that we had 5 on staff for the better part of the day.  It also meant that I got to learn how to run the front desk and was able to watch the snow fall out the front windows.  I needed to learn how to run the desk anyways, and it was nice to have a semi-quiet day in which to learn it.  Basically, I answered the main phone line, answered questions, directed visitors to the galleries and took admission. 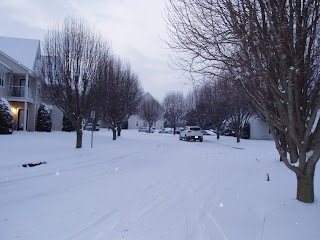 I brought some work with me and was able to get some more prep work done for several events.  Aside from remembering which buttons to press to operate the register, it was difficult to have to stay fairly close to the desk at all times.  I wasn't able to bounce around between different rooms or big projects as much and so I had to stick with the work I'd brought up with me.  Now I'm ready to fill in as needed at the Front Desk.  Next up - learning to work the gift shop register!

The snow let up just in time to head home and once there, I put on my boots and traipsed out for a short walk in the last bits of twilight.  The apartment office doesn't do any snow maintenance so the sidewalks are all snowy-turned-icey.  There were several stretches of sidewalk without any visible footprints so I got to make some new tracks!  I also managed to sneak in a couple stealth snow angels - I'll never get tired of making these!  Made me think of frolicking in the blizzard (snowpocalypse) last year with LF & convincing LK to make snow angels with me at 2am while on retreat in college.   Good times!   :D
Posted by bee at 21:31 No comments:

This week has zoomed by and I find it hard to believe that it took me so long to post about my adventures last weekend!

Last weekend was the 2nd Quilting at the Beach retreat that my mom has planned.  About 25 quilters from around the area get together at a resort on the shore of Lake Michigan and we quilt all weekend long, stopping only to eat & sleep!  I'd spent the week or two prior, planning what fabric and patterns I would need for the projects I was going to work on there.  I'm limited to what fits inside my carry-on suitcase [keeping in mind that I did need to bring basic things like clothes!] and I managed to pack it all in with a little wiggle room for the way home. I'm super lucky that mom has an extra machine and would have extra tools for me to borrow for the weekend - rulers, cutters, mats, pins, threads, etc. (thx mom!)

With such a small airport [ 1 gate] getting there early means sitting around until they open up security 40min. before the flight departs.  As per usual with taking the afternoon flight, I picked up lunch at Panera en route to the airport and was super glad I did since they don't serve snacks on the plane.  The plane was delayed out of Chicago due to a crew member getting sick so we waited for the plane to show up, and then waited on the runway for clearance to depart.  In the end, we were about an hour later than scheduled so it wasn't too  bad.  Everything went smoothly though getting in to Chicago and it's always nice to be home with M&D.

Friday mom & I headed out for a 3 days of non-stop quilting; setting our stuff up & greeting friends as they arrived.  This year was fun because I knew people from last year, everyone wanted to hear about my new job and my aunt [who got me & mom hooked on quilting] came too! Hooray!  The food was wonderful again and after the first night it seems all we do is eat & quilt.  (Although that is pretty accurate for the weekend). 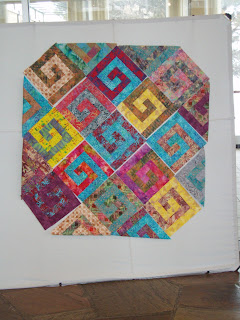 I picked up some great ideas from Cheryl to use at work with the kids and I love to see what other people are working on and what fabrics they chose.  Last year we played a game where everyone brought 2 1/2" strips of batik fabric.  I ended up winning most of the strips and convinced mom to give me the strips she had won ;)  had enough to make a jelly roll of fabric!  This year I turned them into blocks and brought the blocks to put together into a top.  Now I can put it together, quilt it and hang it up in my apartment!  This year's game involved 10" squares of batiks, but I didn't win this time around.

I also got my Sunflower applique started and have been working on that in the evenings this week.  It's really starting to look like the picture and I can't wait to see it all finished!  It's from the Pacific Rim company and they have a lot of great applique patterns that I will probably try after finishing this first one.  I got another quilt top finished & worked on some paper piecing for a set of blocks that I've been slowly working on over the last several years.  Even took a break from sewing to get a back massage which was fantastic! 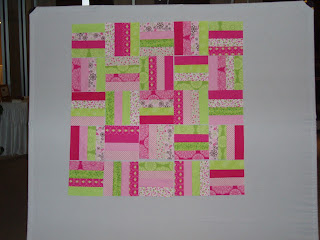 Then it was home again on Sunday with a few hours to see dad and watch the last half of the All-Star hockey game (awesome!) and have another home cooked meal.  Dad even sent me home with some of his homemade deep dish pizza....yummm. This was then brought to work for lunch during the week and is the type of thing that makes co-workers jealous - several commented that I always brought such good lunches in! So thx for the pizza dad. :)

Then it was back to work on Monday and a busy week preparing for workshops, hands-on, Girl Scout programs and Board meetings.  Busy, busy, busy.  Of course, after having a weekend of quilting now all I want to do when I get home from work is to keep sewing; especially now that I have some new quilt tops ready to be finished.  However, these will be added to the end of the list so I can finish up some overdue projects.