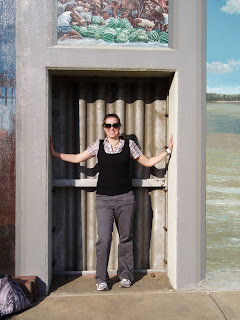 In January of 1937, the Ohio River flooded across several states - including the city of Paducah.  At the time the only barricade was a levee that couldn't hold back the river, which eventually reached 60.6 feet.  Buildings downtown have markers that indicate how high the waters rose as it flooded the streets.  Afterwords, the flood walls were built to protect the downtown from future floods and has done that job well. Although, up until this point; the walls have never been tested with this much water.   <--yikes!

With all the rain we've had in the last several weeks the river has pushed into the major flood stage and currently several counties are in a state of emergency, bridges are closed, roads are flooded out and people in outlying or low lying areas have evacuated. The annual AQS Quilt Show had to move to several other venues in town once they closed up the flood walls last Monday- the Convention Center is on the river side.   *oops*
Interestingly, the walls don't get closed very often; some co-workers say maybe it's happened once in the 10 years or so they've been here. The predicted crest is for 55.8 feet by Thursday and the forecast has little sunshines in it for the next several days - hooray!  Right now, we are at 54.7 feet and so far it seems flood 2011 will be the new 2nd place holder for highest crests. 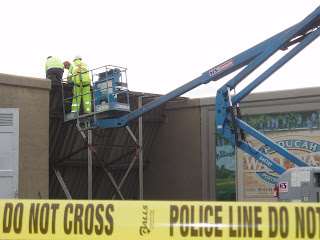 Yesterday the Corps of Engineers blasted out some areas of the earthen levee out at Birds Point (South-east Missouri) to divert the water into the floodway fields/farm land.  The initial blasts shook my apartment enough that I had to turn the news on to figure out what it was.  This should help keep the river from getting up to 58/59 feet and will help keep it out of towns on the Mississippi & Ohio rivers.  Several businesses on the way into work are on lower ground at the edges of the walls and have water in the parking lots, car dealers moved their stock to higher ground and lots of dirt has been trucked in to build some berms to help stop the water from spreading.

We took precautions at the museum and moved all the quilts in storage off-site to our backup higher ground location.  Putting boxes into plastic bags & loading them on & off some vans/panel trucks.  Boxing up quilts that need to go into storage and placing them on the higher shelves in the vault; reviewing how to take down quilts in the gallery in case we need to grab & go made for an interesting week so far.

I'll leave you dear reader, with the link for the city flood wall cameras that give a good view of the water at the walls which has been fun to watch over the last few days!  Flood wall camera views.  Usually there's a road there so you can drive alongside the walls and view the river - pictures from earlier posts about the rising river were taken in that area!
Posted by bee at 21:43 No comments: